Do you realize thousands of companion animals are surrendered to shelters and ultimately euthanized each year simply because their caregivers became ill, entered a nursing facility or passed away? The Biscuit Foundation offers alternatives to prevent pets in these circumstances from ending up in an already overcrowded shelter situation.
Debbie Fuller was born and raised in Alamance County and resides today in Snow Camp, N.C. Her extended family includes 3 Chihuahuas, Rad, Itsy and Dillon. Beck, a 120-pound Labrador and her newest addition, Little Girl, a 13-year-old Pomeranian mixed breed rescue dog. Debbie has always been involved with all types of animals all her life. She was a 4-H member and at the age of 13 was showing American Saddlebred horses and competing at the N.C. State Fair, winning numerous trophies and ribbons. She also taught young children the basics of horse care. Upon graduation from Southern High School, she enrolled in the veterinary technology program at Central Carolina Community College in Sanford, N.C. After completing her studies, she returned to Alamance County and began employment with Alamance Veterinary Hospital in Burlington working with Dr. Don Courtney and Bill Pinson. While working with these two great mentors, she gained hands on experience in animal care that can’t be taught in textbooks and was exposed to the unavoidable and not so pleasant side of veterinary medicine….sometimes pain, suffering and tough life decisions where pets were concerned. Debbie decided to turn her love of helping animals into a business that put a smile on people’s faces and tails waggin’ at the end of the day. In 1984, at the young age of 19, Debbie opened Pampered Pets Grooming and Boarding Kennel in Haw River, N.C. That move was a huge success for her and twenty-five years later she is still seeking out new ways to make people and their pets lives healthier and happier. Debbie’s lifetime commitment to helping pets and people inspired her latest vision. The Biscuit Foundation, a non-profit organization dedicated to helping sick people and their pets through difficult and major life transitions.
For relaxation, Debbie is an avid saltwater fishing enthusiast who loves the Outer Banks of North Carolina, camping on the Blue Ridge Parkway and spending time with family and friends. 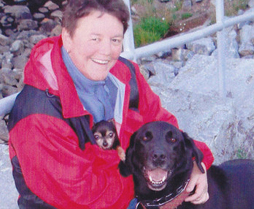 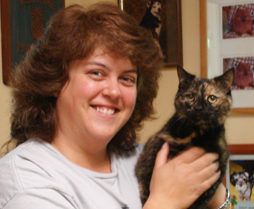 Rene Tamol
Debbie Fuller
President/Founder
Robin Sheppard
Vice President
Robin Sheppard was born in Greensboro and raised in Winston-Salem NC. Spending much time with her grandparents in the mountains of Ashe County throughout her childhood-helped attribute to her love of all things natural. Upon graduation from high school, Robin entered Davidson County Community College. She also attended UNC-Greensboro taking biology, botany, zoology and chemistry classes. During the weekends, she worked part time at Abri Veterinary Hospital in Winston-Salem, NC. Job duties included taking care of the boarding animals, attending to the needs of the hospitalized pets and assisting the vets on Saturday morning appointments. While there, she met and became close friends with one of the staff veterinarians, Dr.Annette Wilson, a Durham Native, which happens to be her vet even today…20 years later.
Robin worked with the American Red Cross Blood Center in Winston-Salem before transferring to the ARC in Durham in 1993. Upon moving to Burlington, she met up again with Dr. Wilson who introduced her to Debbie Fuller, which owned Pampered Pets. Being a boarding client at first with Debbie’s kennel eventually led to a full time position for Robin as groomer and manager. She has been at Pampered Pets for 13 years. It is extremely rewarding work to know the human guardians if the pets we serve trust us entirely and have a peace of mind while they are in our care. She is constantly searching for new ideas to add to the kennel to create postivie results from your pets boarding or grooming experience. (Future plans include an in-house exercise treadmill for dogs as well as hydro-massage therapy sessions.)
Robin’s interests are anything to do with the outdoors, reading, birds and raptors.
Aspiration: To become the person my dog thinks I am.
Rene Tamol was born and raised in Buffalo, NY, but now resides in Cleveland, NC where she freelances in print related projects. Her extended family includes 2 American Shorthair cats; Whiskers (21) and Reba (11). Growing up she worked side by side with her family in their family owned bakery in Lancaster, NY where she enjoyed taste testing the goodies. After moving to NC in 1991 she headed in a new direction in graphic design. In 2009 she began volunteering her time and services with the Biscuit Foundation. She helps during events, on projects and even works on the website and facebook page. In May of 2010 she adopted a 25 year old cat named CoCo. Even though CoCo was up there in age, she still had a lot of kitten left inside. She loved playng with a ball or chasing her tail, but most of all she loved to hear herself talk and no matter what kind of day she had, you could always find her laying beside Rene. Sadly enough CoCo passed away in May of 2011, but she certainly left an impression on everyone who got to know her.
Rene enjoys surf and pier fishing as well as camping and laughing with friends or just being lazy and watching a good movie on the couch while eating popcorn with her cats by her side.
Who We Are